A leap away from the EU, a leap towards Turulism? 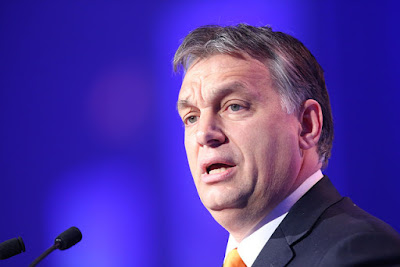 To be proud of your nation and cultural heritage is common, it is even desired and understandable. Some, however, fall into the passions of ultranationalism. In the case of Hungarians, this phenomenon might be called turulism.

The referendum on the EU quota on the resettlement of refugees in Hungary—is passionately discussed nowadays. The stakes are high and we all wish for clear answers of what is happening in Hungary. Is Orbán the savior or the annihilator?

Let us first repeat the crucial question that was asked on the 2nd of October: Do you want the European Union to be able to mandate the obligatory resettlement of non-Hungarian citizens into Hungary even without the approval of the National Assembly? (Translation from Wikipedia.)

On 5th October Bence Tuzson, Communication State Secretary at the Prime Minister's Cabinet Office announced that the government will incorporate the results of the referendum into the Constitution as over three million people supported the position of the government. However, 57,2% ignored the referendum thus it is hard to say that the government is acting in favor of the whole or at least the majority of the population. Plus, 6.33% of the votes were invalid, which could be understood as a form of protest while keeping the civil obligations. On 10th October PM Orbán submitted the Constitutional amendment—saying that no foreign citizen can be relocated to Hungary through obligatory resettlement. All immigrants and asylum seekers must be evaluated individually except for citizens of the European Economic Area, which are excluded from this rule.

The government believes that the suggested five Constitutional amendments would create a “new unity” of Hungarians . The main goal is to anchor the constitutional identity of Hungary which should be protected on all state levels. Indeed, the “new unity” will include statements regarding territory and population. The government wishes to base their claim that the nation state should be the basis for European decisions, and not vice versa, on constitutional grounds.. This is not building on the principle of synergy between EU and nation state interests but rather intends to build a hierarchy. Orbán´s government says it is taking the Hungarian spiritual essence under its protective wings to shield it against those who threaten Europe—and against Brussels´ dictate.  Whether it will be approved is a hard question.  For passing thought the Parliament the amendment has to be approved by a 2/3 majority. The far right Jobbik might secure the needed majority for FIDESZ, the support is already announced. Broader discussion within the Parliament about the concrete text is scheduled for 17th October. We will see on 8th November whether FIDESZ’s attempt for the seventh constitutional change will be another success.

The referendum itself has less of a legal affects than a political one. The international media is strongly criticizing Orbán´s referendum. As John Dalhuisen, the Director of Amnesty International said, “Prime Minister Orbán has replaces the rule of law with the rule of fear”.  And yes, fear was systematically fed by the campaign itself. Statements such as “we love our country” and “we do not allow our daughters and wives to be raped by immigrants” were only some of the many slogans used during the campaign. Even the “Roma card” was used in an unexpected way: the campaign threatened that migrants will steal the chance for a decent life for the Roma living in Hungary – as stated by Roma representatives close to the government.

Mass hysteria was fed by oversimplifications, the degradation of more complex views into black-and-white viewpoints, omnipresent xenophobia all served the rhetorical needs of officials. But, in fact, the general population has no real interaction with refugees or migrants (if we do not include their transition through the country). One of the opposition voices, the Kétfarkú Kutya Párt satirically pointed out in a question on a billboard set up in response to the official referendum campaign: “did you know? A common Hungarian sees more UFOs than migrants during their lifetime”.

Who really profited from the historically most expensive referendum (estimated to cost approx. 42,816 million Euros)? It was reported that two days after the referendum new billboards were placed in Budapest —exactly the same as prior to the referendum, repeating the appeal to vote for NO. What is the legitimacy behind placing outdated billboards on the street? The anti-migrant campaign continues after the referendum and does not lose its intensity.

On the 5th of October after the bomb attack in Budapest the Government decided to launch a several-day-long counter-terrorism exercise in the Puskás Ferenc metro station by simulating a real-life terrorist attack. The simulation included men, women and children acting as terrorists and victims, with shouts of Allahu Akbar. V4 officials and other prominent guests were invited to observe this exercise.

In addition to fearmongering, the government always sees on calling on the sorrows of Hungarian history as a winning strategy . One of the examples used by Hungarian officials goes like this: Hungary has always faced difficulties alone, especially those imposed by foreign powers (such as the 1956 uprising). Doing what is right and needed is often judged in the present but only the future will show that righteousness is on the Hungarian side. Indeed, the fire of the heart fed by these sentiments can often blur the facts that are on the table.

However, let´s look now at the European dimension of the whole quota-related problem. The passionately discussed quotas were introduced for the sake of solidarity within the EU, aiming to reduce the sudden burden of countries being closer to the conflict zones or being at the Schengen border as EU countries would share the evaluation process of asylum seekers. It does not mean that Brussels is imposing forceful relocation. Asylum applications would be assessed according to national law by national officials.

In a recent letter from Donald Tusk in December 2015, Orbán agreed with the European Council about all the suggested quick measurements regarding asylum seekers. In addition, the EU itself agreed that the project of obligatory quotas came to a dead end at the Bratislava Summit in September. Solidarity among EU member countries will now be on different terms. So, why was the referendum necessary? Who benefited from it and how?

The media was saturated with the campaign. As a result, the majority of other crucial issues, such as corruption, cronyism, insufficient healthcare and the schooling system were marginalized.


Orbán is building up his arsenal of voters based on mild (or at least milder than Jobbik) turulist rhetoric. Simply because it works. Turulism has always been present in the Hungarian society, even before joining the EU club. In fact, neither the referendum nor the Constitutional amendment will bring any significant change. Nevertheless, even though it might be perceived that way, it is not an attempt to disintegrate the EU and there won´t be a HUXIT. Hungarians are proud members of the EU. For other populist leaders across Europe who are following the model of illiberal democracy this might be different, meaning they might appeal for exiting the EU. Indeed, this cannot be applied for Hungary—so far.

Alexandra Tóthová
Posted by GLOBSEC Policy Institute at 12:24 AM No comments: