A Bomb in Budapest: “New” Europe and Terrorism 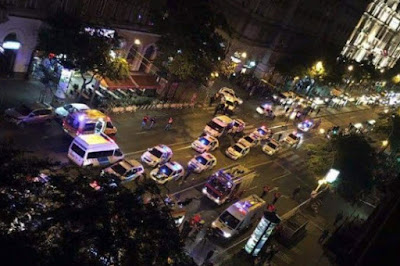 On 24th September, Saturday, explosion ripped through the centre of Budapest and seriously injured two policemen. The blast occurred a week before the country goes to the polls to vote in the controversial migrant quota referendum. The social media chatter immediately connected the bombing with the referendum as some attempted to blame the government for staging the attack so that it could be seen as a victim of ISIS terrorism, just like France and Germany. This, if the perpetrator was to be a Muslim refugee/immigrant, was to allegedly underscore the case for voting “no” in the upcoming referendum and thus deliver a political success for prime minister Orban.

However, this was not the only conspiracy theory on the origins of the Budapest blast peddled by the social media. Orban’s followers also had a field day. They accused the “left” or the “liberals” of staging the attack so they could later claim that the government had really been responsible for the bombing. This interpretation of the event would “allegedly” be looked upon favourably by the international media which remain extremely suspicious of the Hungarian government.

Either way, many claimed this was a cover-up which was meticulously planned and timed. [footnote: The proponents of both conspiracies received a blow when on 26 September prime minister Orban indicated that there was no link between the attack and the migration crisis].

Thankfully, the Hungarian media and especially its police would not involve themselves in such deliberations. The police is still searching for the perpetrator and steers away, so far, from politicizing the issue. Its chief indicated that terrorist motive is one of the lines of inquiry his force is pursuing in relation to the blast.

One could say that this is an unprecedented event in recent Hungarian or Central European (CE), Central-Eastern European (CEE) history as terrorism seemed to have hardly made an impact on this part of Europe. There simply were no high profile attacks, elaborate plots or spectacular arrests of terrorist operatives for terrorism researchers to study and for the general public to even notice the phenomenon.

The Budapest blast, however, is not the first act of terrorism in CE(E). While studying it and considering its implications or timing, let’s remind ourselves of two major facts related to this phenomenon’s history and development in the region:

1. This is not the first act of terrorism in Central Europe, Central-Eastern Europe, or post-communist “new EU.” Remember Burgas bombing in Bulgaria from 2012 where 7 people were killed. And this is just the tip of the iceberg (see here for an outline of terrorist activity in the region). Yes, most of it was not violent in nature as terrorists gathered intelligence or worked towards providing material support to their parent organisations or groups.

2. Despite the data (always contentious) provided by “new” EU Member States to Europol (see e.g. here for a snapshot of terrorism attacks, arrests and convictions in all Member States), this part of Europe is not “terrorism free.” Of course, it suffers from far, far less terrorism than Western Europe or the “old’ EU but it had its share of:

a)     hoaxes, bomb scares, more or less credible news of elaborate plots being prepared – Warsaw 2005, Prague 2006.
b)     Attempted or successful Lone wolf attacks – shooting in Estonia’s ministry of defence in 2011; an attempt to target Slovenian Prime Minister by a citizen of Croatia in 2009; bombing of McDonald’s in Kosice, Slovakia in 2011.
c)     Far-right terrorism akin to Germany’s National Socialist Underground (Hungary 2008-09) – targeting Roma, just like their German counterparts, the terrorists had links with the local security services.
d)     Hostage dramas as the inhabitants of the region found themselves kidnapped by terrorist organisations or in regions with high level of terrorist activity (Poland 2008, Czech Republic 2013, Estonia 2012,  Hungary 2012).
e)     Prolonged courtroom sagas (Poland 2012, Lithuania 2009-2010) related to attempted terrorist attacks.
f)      Re-emergence of the foreign fighter phenomenon (remember, Poles have been involved in going to foreign wars from at least late 18th century, the country’s national anthem is a song of foreign fighters), this time in relation to Islamist militancy abroad (and also the conflict in Ukraine). Although the statistics from “new” EU Member States (e.g. Poland: 20-40, Slovakia: 8) show, just like the Europol data, that the region’s experience with this phenomenon bears little resemblance to the French or Belgian ordeal, it nonetheless appears to be gaining recognition and traction. One Polish jihadi returnee from Syria will go on trial later this year or early new year. It is now certain that he met other likeminded Islamists in Poland, most probably at a mosque in Warsaw, and together they travelled to Syria.
g)     ISIS or ISIS sympathisers activity: 2015 saw arrests of what was dubbed a “logistics cell” performing fundraising activities for “brothers in Syria” in Poland.
h)     Bombings – yes, a surprise but there were also others bombings in the “new” EU, and not just the recent blast in Budapest or the aforementioned 2011 Kosice bombing of a McDonald’s restaurant. There was a spate of (e.g. more than 80 in 1995 in Estonia alone) bombings in the region in the aftermath of 1989 as different criminal syndicates fought never-ending turf wars.

The Budapest bombing (termed #Budapestexplosion in social media), if terrorist in nature, is a new for the “new” Europe but it comes on top of other terrorism developments. Consequently, we should not be surprised that a growing number of individuals or groups will utilize this method of warfare for accomplishing political goals. In the last couple of years, quite a few already tried to stage their own “Budapest explosions” before someone actually succeeded in doing that. Unfortunately, more will follow.