Western Balkans in times of the EU existential turmoil 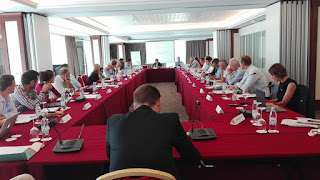 How to make sense of the EU enlargement cause amidst great uncertainty over the future course of the European Union after Brexit? Can the Western Balkans avoid the disintegration and conflict exacerbated by fraying Transatlantic and European bonds? These and other questions were addressed by over 30 political analysts and experts from around the EU and South-eastern Europe over a workshop organized by the Belgrade-based European Fund for the Balkans in September 16-18, 2016 in Opatija, Croatia.

When the Brainstorming with the Balkan Advisory Group (BIEPAG) met in early 2016, we discussed gradual eroding of the EU perspective for the region (‘loss of the paradigm’). EU Enlargement was seen as still dominant political discourse on the surface while in fact it was becoming only a formal reference (or mantra) providing ‘external legitimacy’ but without much policy substance in the respected Balkan accession or pre-accession countries.

A lot has happened in the past few months: the UK vote to leave the EU, presidential candidacy of Donald Trump, the increased popularity of the anti-establishment, anti-immigrant and far right parties across the EU, frequent ISIS-inspired terrorist acts in Western Europe, or consolidation of authoritarian regime in Turkey come to mind. As Florian Bieber, Director of the Centre for Southeast European Studies at the University in Graz pointed out, the resulting effect is more inward looking EU, and lower attractiveness of the enlargement and liberal democracy. ‘Not that the geopolitical challenges are strong but the European offer is so weak’. Furthermore, the potential electoral success of far-right parties in upcoming elections in Austria, Netherlands and France will have clear negative repercussions: they oppose the EU project and reject enlargement. This symbiotic relationship between authoritarian strongman outside the EU and eurosceptics within it is likely to strengthen in the near future.

However, as the source and engine of crisis lies primarily in the EU itself, reform processes in the WB6 countries – all at different stages of European integration - have to be driven more from within. This is not likely to happen: EU conditionality and leverage through the enlargement process, plus the US diplomatic muscle and NATO’ as security provider have been the pillars of progress and stability in this post-conflict region over the past two decades.  As all of these outside actors are now less able or willing to play a decisive role, Balkan strongmen are more on their own – and willing to drag their feet, as it in the continued, deep internal crisis in Macedonia.

Yet, as other participants pointed out, people working on the Balkans in the EU institutions – or in NATO, for that matter - sound much more up-beat and optimistic in their assessments. In July, few weeks after Brexit, Serbia has opened two key chapters in the EU membership talks, Montenegro is slightly ahead (as it is becoming full member of NATO), and Albania on the right path to start membership talks next year, if it implements the justice reform. Some minor achievements came also from ethnically divided laggards – Bosnia and Herzegovina, and Kosovo. Even amidst the current EU turmoil, there still are huge majorities in support of joining the Union in all six Western Balkan countries. So the enlargement train is moving on, Brexit will not stop it. In a long-term run, the EU Commission officials are convinced that ‘enlargement process by stealth’ will work, although it might take more time – perhaps 15 years rather than eight as in the case of Croatia. But will there still be a Union to join in 2030? Or are these officials like captains at the enlargement Titanic which is slowly sinking?


This moment of EU’s existential crisis is perhaps a very good moment to start thinking outside of the box about the future of this non-integrated, fragmented south-eastern European enclave of some 20 million people living in six small states: what might be an alternative strategy to the EU enlargement? How can we re-think our approach if a more differentiated, multispeed Europe takes concrete shape in the near future? How can we incentivise more reforms and economic modernisation even without the pre-accession IPA funds? How can we incentivise more regional cooperation and further progress towards good neighbourly relations even when mutual hostilities from recent conflicts are still alive? Stay tuned for analysis of these and other questions, which were put forward for the EFB's Balkan Advisory Group to work on for the next period.