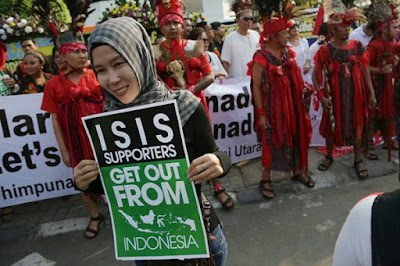 Just two days before the start of the GLOBSEC Bratislava Forum 26-28 May, 2017 the news reported a twin blast by suicide-bombers in East Jakarta which killed three policemen and injured 11 people. According to the spokesman of the Indonesian police, the attackers had ties to ISIS. With such a fresh tragedy in our mind we attended the Dinner Session titled Islamic Radicalism in Southeast Asia with two distinguished speakers: Hans-Jakob Schindler, Coordinator, ISIL (Da'esh), Al-Qaida and Taliban Monitoring Team, United Nations Security Council based in New York and Sabariah Mohamed Hussin, Research Analyst at the International Centre for Political Violence and Terrorism Research with the Nanyang Technological University in Singapore chaired by Theresa Fallon, the Director of the Centre for Russia, Europe, Asia Studies based in Brussels.

The central theme of the discussion was the increasing globalization of Islamic Extremism, as the recent events in Indonesia demonstrates. Can the region of Southeast Asia be the new province for the Islamic State? Is there the possibility of ISIS 2.0 or 3.0 to be established in the region of Southeast Asia? It is false to think that the only aim for Islamic State is the Middle Eastern territory—and ISIS 2.0 is already established in the Philippines. For Islamic radicals the Southeast Asia region is the arena of opportunities—and exploration for opportunities is already ongoing.

On 26 May, government officials of the Philippines confirmed that foreign fighters of ISIS tried to establish a province in the city of Marawi on Mindanao island. President Duterte immediately imposed martial law in the region and assigned troops to fight the terrorists but the military failed to recapture Marawi.  Terrorists with combat experience chased out from the Middle East are now returning to their home regions, for many it is Southeast Asia, with the same mission: to establish the Islamic State. The bloodbath and combat between the army and terrorists in Marawi is still ongoing and open-ended. Will more regions face fights against locally established provinces of the IS? Probably yes. How does this effect the so-called beacon of Muslim democracy, Indonesia? Can we expect the next ISIS province, the ISIS 3.0 to be established in Indonesia?

Possibly no. The recent events cast doubt on Indonesia´s image as a role-model for Muslim democracies for very a good reason. Indeed, if Indonesia wants to develop further as an inclusive or even liberal democracy, the government needs to undertake bold measurements to protect freedom of religion and speech. Western media tend to report that Indonesia has its foot on the path towards radicalization which is actually far from the truth. It is false to assume that all Muslims are prone to ISIS—and this is especially true for Indonesia.
Being a democratic country, Indonesia served as a prime example during the Arab Spring to Middle Eastern and Northern African countries, proving that Islam and liberal democracy are compatible —even though democracy in Indonesia is still far from perfect.

Indonesia is the biggest Muslim country counting 207.2 million followers, which stands for more than 87% of its population1. Indonesia also has an strong ethnic diversity counting more than 350 ethnic groups. Although the state´s official philosophy, the Pancasila builds on the “Unity in Diversity”, frequent tensions arises among different ethnic groups.

Indonesia has not adopted Islam as it´s official state religion, nor does the Islamic law govern the country which is anchored in the Pancasila. The degree of secularism is strong, although far from perfect—as the recent case of the ex-governor of Jakarta, Basuki Tjahaja Purnama, known as Ahok demonstrates.

Ahok, who has Chinese and Christian ethnic heritage was sentenced to 2 years of prison for blasphemy and hate speech in May 2017. Ahok was accused of insulting Islam in September 2016 when he criticized the interpretation of the Koran´s Al Maidah 51 verse which if we take the formal interpretation prohibits non-Muslims from leading a Muslim country. Hardline Islamist parties such as the Islam Defenders Forum used this opportunity and in their third protest managed to mobilize more than 500 thousand protesters against Ahok in December 2016. Whether the rally means that the Indonesians would welcome a more radical agenda in general or it is simply a well-orchestrated emotional reaction to the Ahok-case is difficult to determine. Trials of blasphemy are not unique in Indonesia but the accusation was never used against a high-level politician prior to major elections.

Ahok´s case has put Indonesia´s status as the role model into question. The UN rights experts urged the government to abolish the blasphemy law. “This case also illustrates that the existence of blasphemy law can be used to justify intolerance and hate speech,” they said. “Blasphemy law is not compatible with a democratic society like Indonesia and it harms religious pluralism in the country.” One can only agree with Benedict Rodgers, human rights activist, who wrote: “country where supposedly “moderate” Muslim politicians give radicals a platform, unleashing and emboldening the forces of intolerance, is a country playing with fire”. Politicians should not give a platform to Islamists and should adopt a law which truly strengthens freedom of religion and speech.

The majority of Indonesian Muslims are very supportive towards religious plurality and peaceful coexistence of various religions. ISIS actively campaigned in 2014 to recruit fighters from Indonesia with little success. The hardline Islamic parties do not have yet the majority support.  Based on the report of IPAC about 500 people flew to Syria and Iraq to join the fighters from Indonesia. Most of them were detained before their arrival and sent back. If we compare this estimated number to the population, it is infinitesimal. On the Global Terrorism Index from 2016 Indonesia ranked on 38th place, lower than the U.S. or the UK. ISIS recruiters simply do not resonate within the Indonesian society to an extensive degree. Why? Indonesia doesn´t have a repressive government, Muslims aren´t a victimized minority, what takes the strongest card from recruiters.

Moreover, it is important to note that ISIS has a tremendous counterweight in the region: the Nahdlatul Ulama, known as NU, which was established in 1926 to counterbalance the Saudi-Arabian Wahabism. NU claims to have over 50 million members and aims for spreading a tolerant, peaceful, inclusive anti-jihad Islam. Indonesia´s first democratic president hailed from the NU party and their influence is strong.

So far Indonesian officials did not ban any radical or fundamental group as being a vital part of the free political dialogue. However, based on the recent domestic incidents and in the Philippines, President Joko Widodo, who represents the moderate anti-Jihad Islam stream,  claimed to “clobber” any radical group that goes against the principals of Pancasila and the secular state, such as the recently banned Hizb ut-Tahrir Indonesia which aims to establish an Islamic Caliphate. Indonesia has some sleeping cells of radical Islamists and the influence of radicals is growing which has the minorities especially concerned. Hardline Islamic movements were able to mobilize thousands of protesters in the Ahok-case. Indeed, the masses as part of the majority are easily mobilized against the others and the political game/aim behind this mobilization is not visible at first sight.

The Ahok case pointed out the imperfections of the Indonesian secular pluralist democratic system. There is room for improvement in defending pluralism. It also served as a warning for the moderate Muslims—they also need to be more active. Western media tends to report only on radicals in the region but Indonesia is still inclusive and ISIS will have an extremely hard time to grow. However, it needs to overcome challenges to remain so.