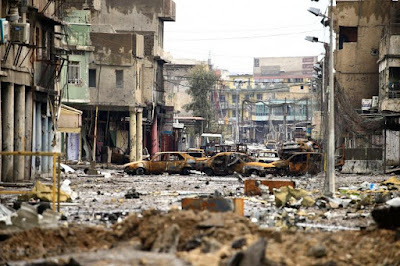 (Cars burnt and destroyed by clashes are seen on a street during a battle between Iraqi forces and Islamic State militants, in Mosul. Photo: REUTERS/Thaier Al-Sudani)
What a difference three years make. In 2014, we saw Abu Bakr al-Baghdadi, the so-called “Caliph” of the so-called Islamic State, lead prayers at the Mosul’s Great Mosque. In July 2017, the same mosque is in ruins and the Iraqi prime minister, Haider al-Abadi,  “ announce[s] […] the end and the failure and the collapse of the terrorist state of falsehood and terrorism which the terrorist Daesh [Islamist State/ISIS/ISIL]  announced from Mosul.”

Of course, prime minister al-Abadi is not completely right. ISIS still controls (some) territory and its ‘capital’ of Raqqa is still holding. Nonetheless, discussions already abound as ‘what comes after ISIS.’ All seem to agree that ISIS, in some way, shape or form, will live on, and that it will probably morph into a terrorist organisation, no longer able to control territory. At the same time, many stress the fact that even its defeat, or in reality – weakening, will not solve all of the Middle Eastern, or even Iraqi or Syrian problems. Others also underscore the threat from its non-Middle Eastern members who seemingly stand ready to e.g. return to Europe and stage series of more or less spectacular terrorist attacks, while linking up with the local ISIS sympathisers. In short, things will not get much better, expect further trouble and do not rejoice.

One thing which I feel has not yet been stressed enough in these deliberations, although Peter Neumann raised this issue at this year’s GLOBSEC, is the fact that we probably underestimate the effect of ISIS on the future of global jihadism, and as a consequence, international or global terrorism. Regardless of whether the Caliphate will survive another year, it will – at least, in a skeletal form, some of its alumni, either Iraqi, Syrian or “foreign fighters,” will be the leaders of the next generation(s) of jihadists. They will be the role models, the ones to which younger followers look up to, they will act as force multipliers for different, smaller jihads around the globe, and finally, they will plot, scheme and sometimes, stage spectacular terrorist attacks. Yes, many will die in the meantime, others will be intercepted by different police forces and security services but some will survive and continue their terrorist careers in different countries or organisations. They will bring all of their expertise and especially their contacts, and networks with them. Last but not least, potentially, there are thousands of candidates for such jihadist conveyor belts, with more than 12 -15 000 foreign fighters present in the ranks of ISIS in March 2017 alone plus thousands of Iraqis and Syrians fighting for the organisation on different fronts.

To appreciate this point, simply consider the career of one individual – the current leader of Al-Qaeda, Ayman al-Zawahiri. His involvement in conspiratorial, clandestine anti-state activity dates back to the mid-1960s. He led one jihadist organisation, Egyptian Islamic Jihad which then merged with Al-Qaeda in 2001, as early as 1981. He has been leading the latter organisation for six years already. His is a life in jihad, and the jihadist milieu is full of individuals who have a peculiar tendency to re-appear or re-invent themselves after years of seeming inactivity. Perhaps, we should actually be saying that they have never become inactive (see e.g.: the case of the Frenchman, Boubaker el-Hakim, active in jihadist circles between 2002 and 2016, veteran of two Iraq wars, with a spell of imprisonment in between, associated with Al-Qaeda, and then ISIS), and are poised to come back at some point in the future.

Taking this into account, should convince us that focusing on ISIS’ longevity, and its presumed imminent doom, may not be the most effective way forward. There is no point crying over spilt milk. Let us focus on the afterlives of ISIS members, and their future careers. They will still be with us, and some might emerge as the not-so-surprising jihadi trend setters in the future. We cannot lose track of them. From a European perspective, this is far more important than whether the “Caliphate” turns four next year. Of course, it will and some of its alumni are already plotting their post-ISIS lives.